The evening of Wednesday, April 27th in the ballroom at the Willard Hotel, a group of small business advocacy groups; DC Metro Hispanic Contractors Assoc., Anacostia Economic Development Corporation, National Assoc. of Minority Contractors and the CHOICE program of the Building Trades Unions, celebrated 'Diversity in Construction' by recognizing 12 construction firms who represent the highest quality of efforts to insure access, transparency and the nurturing of small businesses. These 12 organizations have executed business models that produce top quality outcomes while at the same time opening up opportunity for small businesses and create wealth in their communities. Over 200 construction professionals consisting of both small contractors, construction professionals and large established firms dined, networked and witnessed the awards ceremony.

The Keynote speaker for the evening was Senior Vice President, William Von Hoene on behalf of the new PEPCO/Exelon company who expressed their efforts, respect and concern for the principles enunciated in our goals and purposes. Mr. Hoene delineated the achievements of his company in terms of how they accomplished their diversity supplier goals and their commitment to community participation and inclusion. Melissa Washington, Vice President for Corporate Affairs at Exelon and Donna Cooper, PEPCO President were also in the audience for the evening, contributed brief remarks and presented the awards. Also present and presenting an award was Brian Argrett, President and CEO of City First Bank. Ana Harvey, Director of the Dept. of Small & Local Business Development also spoke to the assembled entrepreneurs on behalf of the District government. Melissa Bolling, Director of DCRA was also in the audience.

The awards were decided by votes from the members of TCA and tabulated with the help of the accounting firm of Cohn Reznick. TCA plans to hold this diversity reception every year from now on in order to highlight the importance of diversity, minority contracting and small business mentoring in the construction industry of the Washington metropolitan region. None of this would have been possible without the support and sponsorship of major organizations in our region beginning with the new PEPCO/Exelon company, City First Bank and Flaherty and Collins. The affair was produced in conjunction with the National Hispanic Construction Association as part of their Legislative Summit.

The efforts of the construction alliance coalition is to generate growth and prosperity among small DC and regionally based Hispanic, minority and immigrant owned companies and increase self sufficiency and self reliance in the construction sector locally. As we said in our welcoming statement:

"The struggle always continues. What we're doing here tonight is attempting to bring together those young, hungry small businesses with their strong, successful counterparts in an industry that is very tough, but is also a pathway for wealth creation and entry into the middle class.

We are blessed to reside in an area that has some of the most remarkable, talented construction businesses in the world and some of the most progressive public administrations in the country. The 12 companies we recognize and honor here tonight have shown they are among the very best at offering opportunities, opening doors and sharing their vision with a variety of place based, home grown entrepreneurs who have demonstrated talent, doggedness and excellence. All the while, these larger, stronger firms maintain a high standard and build not only incredible buildings and projects, but understand that it is when we encourage diversity, inclusion and the nurturing of our regionally based small businesses we achieve not only success, but become part of the fabric of our community."

Thank you and our blessings to all those who participated in a groundbreaking evening of recognition and joy! 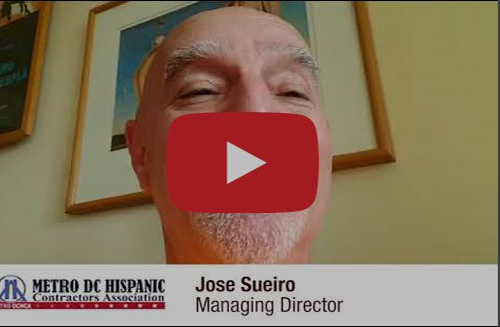